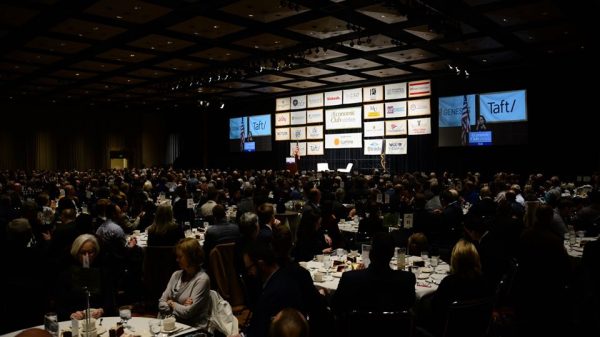 Virtually every great American city offers a forum where the intellectually curious can be stimulated by the finest representatives of the contemporary lecture circuit. Proper Bostonians flock to the Ford Hall Forum, the Commonwealth of California attracts huge crowds in San Francisco, and windblown Chicagoans pack the Executive Club. Central Indiana long ago joined that select company with the Economic Club of Indiana.

Its roots trace to the Penrod Society, a group of young men whose motto is: “For the support of cultural and educational activities in the Indianapolis area.” Members of Penrod conceived and refined the idea for the club, organized it, underwrote it, and, for the first several years, ran it.

Three Penrod members are generally credited with being the driving force that led to the formal organization of the Economic Club on September 16, 1974. They were David S. Orr, then an Indiana Bell executive; John Medveciks, an investment broker; and Theodore R. Boehm, retired judge on the Indiana Supreme Court. 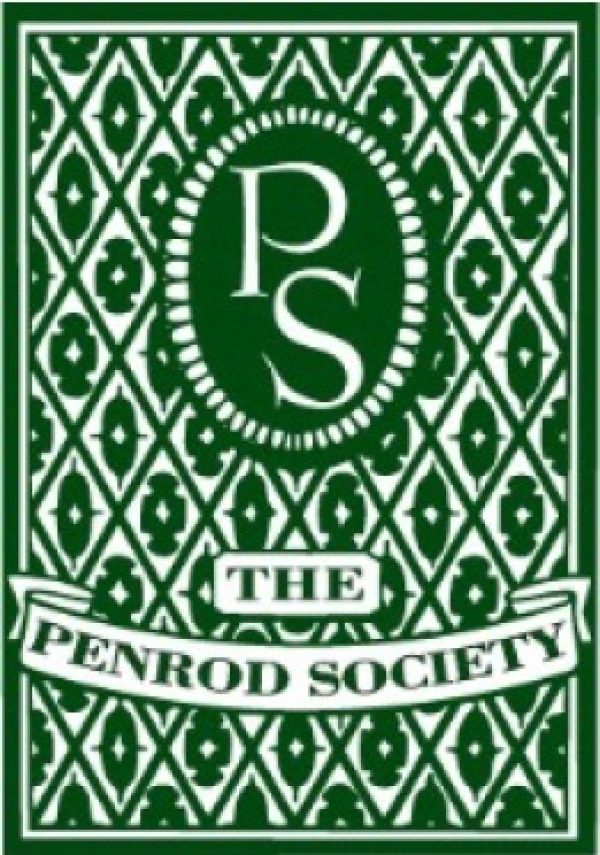 Boehm, Penrod president at the time, and Orr, the Economic Club’s project manager, drew on the experience of the Economic Club of Detroit in launching the Indianapolis version, but with some significant adjustments. While the Detroit club met weekly and charged more than $150 in annual dues, Penrod members agreed that one program per month was adequate and dues should be affordable for the entire community.

Penrod’s leaders also thought a board of directors composed of the city’s top business leaders would be essential in launching the club. Thus, they persuaded the late Frank E. McKinney, Jr. to host an organizing luncheon at American Fletcher National Bank on August 16, 1974. The concept was not only endorsed immediately by the audience but moved immediately to the next step, the election of officers for the first year. That slate included president Thomas H. Lake, then president of Eli Lilly & Company; vice-president Henry Goodrich, then chairman of Inland Container; treasurer McKinney; and secretary Dr. Robert Greenleaf, a business professor at IUPUI. (Greenleaf remained in office long after that first year and directed most of the club’s activities until his retirement in 1991). Of 75 persons contacted for that initial meeting, 55 consented to become members of the club’s initial board of directors.

The Economic Club has had remarkable continuity in leadership over its 40 years. Frank McKinney served as the first treasurer from 1974 through 1985. He was succeeded in 1986 by Lawrence A. O’Connor, president of Bank One, Indiana, NA. Thomas H. Sams, chairman of Benicorp Insurance Company, became the club’s third program chairman in 1979 and served in that responsibility until 1986. Other past program chairmen include: Theodore Boehm, the late Thomas Moynahan, Allan Hubbard, Robert Webster, Mitch Daniels, Gordon St. Angelo, Leslie Lenkowsky, Owen Melton, Jr., and Charles Quilhot. 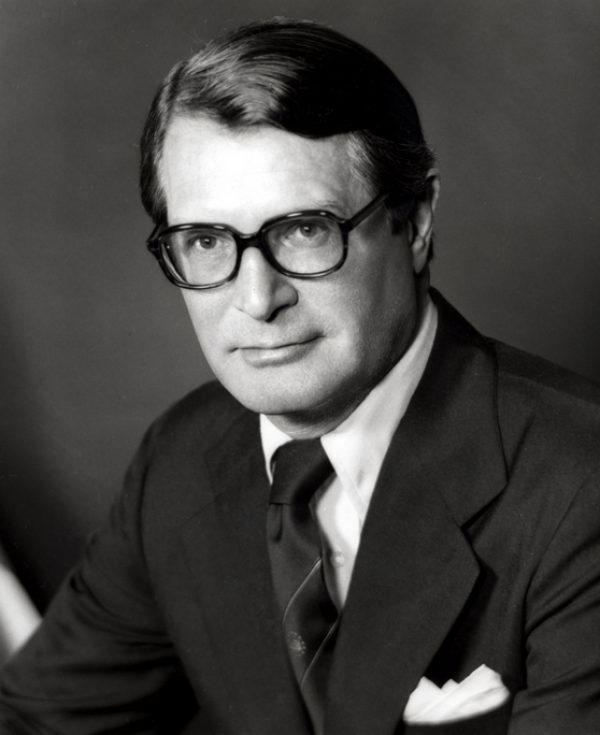 Within months after the organizing luncheon, the Economic Club was able to conduct its first program, a November 4 speech by Elliot L. Richardson, the former Attorney General of the United States and one-time Secretary of Defense. Richardson was a year removed from his role in the so-called “Saturday Night Massacare,” when President Nixon dismissed him for his refusal to fire special prosecutor Archibald Cox during the Watergate investigation. Portending things to come, a crowd approaching 900 persons turned out for that first luncheon and the rest, as they say, is history.

Since 1974, the Economic Club has acquired a status which attracts speakers wanting to address a significant Midwest audience. Still operating on Theodore Roosevelt’s thesis that “Indianapolis is America’s most representative city,” speakers frequently want to test their new ideas before what many perceive to be one of America’s most typical audiences.

For example, prospective presidential candidates have frequently come to the Economic Club to test the waters, as George Bush did in 1978 before challenging Ronald Reagan in the 1980 primaries. This was also true for Delaware Governor Pete DuPont in 1986, feisty Texas Billionaire H. Ross Perot in 1988, and publisher Steve Forbes in 1994. 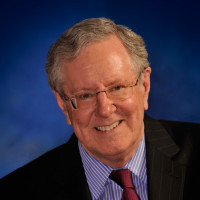 Cabinet officers have been among the club’s favorite speakers and have set most of its attendance records. Secretary of State George Schultz made a major foreign policy address here on April 22, 1985 and his audience of 2,400 may never be equaled. His mark broke the earlier attendance record of 2,013, set by Secretary of Treasury Donald T. Regan on September 14, 1981. Another visit by a cabinet member was a September 1992 speech by Secretary of Defense Richard B. Cheney, who argued against deep cuts in America’s military budget.

Foreign dignitaries have produced some high moments for the club. Among them was a 1984 appearance by Edward Heath, former Prime Minister of Great Britain, a 1989 speech by Derek Burney, the Canadian Ambassador to the United States and a 1998 address by F.W. DeKlerk, the Nobel Prize winning former president of the Republic of South Africa. 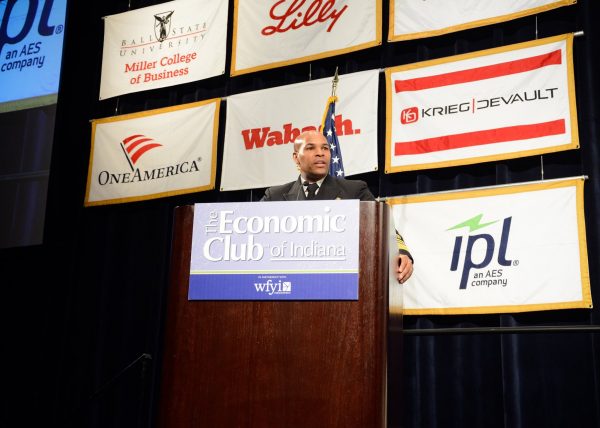 Most club members probably would tell you the membership’s all-time favorite has been economist Milton Friedman, a three-time visitor. Friedman was the club’s second speaker during the 1974 inaugural year and in 1985 returned to join fellow Nobel laureates George Stigler and James Buchanan in a panel discussion that may never be duplicated for sheer distinction. Friedman returned to Indianapolis a third time in 1992.

It is noteworthy that several presentations to the Economic Club have made it into the pages of “Vital Speeches,” which twice monthly reproduces ten or so major speeches made around the globe.

Once upon a time, planners from other cities did what Boehm and company initiated more than two decades ago; they went to Detroit and Chicago to learn how a forum club is run. Today, they come to Indianapolis as well, as visits by delegations from Atlanta, Philadelphia, Cincinnati, Louisville and Chattanooga, among other, will attest.

At the moment of its birth, the club adopted a modest mission statement: “to promote an interest in, and enlighten its membership on, important governmental, economic and social issues.”

That mission statement has obviously and thankfully been taken seriously.